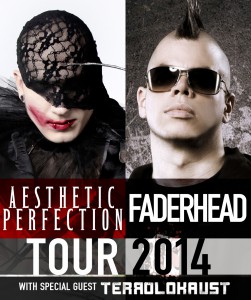 Klubb [re]form is proud to present the Aesthetic Perfection/Faderhead tour show in the south of Sweden. Support on the tour is from Spanish dark electro duo Terrolokaust!

AESTHETIC PERFECTION have toured in the past with names such as COMBICHRIST and ICON OF COIL including numerous festival appearances. This year will also see them supporting COVENANT in Germany this September. Their new single “Antibody” is single 1 out of 3 from their forthcoming new album due to be released in early 2014.

FADERHEAD
It’s 2013 and FADERHEAD’s electronic music assault is in full swing. One EP, six highly acclaimed albums and two compilations in 6 years – as well as 4 massive worldwide clubhits with “Dirtygrrrls/Dirtybois”, “TZDV”, “Destroy Improve Rebuild” and “Fistful Of Fuck You” – have moved the project into the limelight of the harder electro scene. From stompy techno to synthpop to dirty groove-laden electro, Faderhead mashes it all up like no one else which is evident by the new release “FH4”.

TERROLOKAUST
When artists of this caliber in the industrial music scene are prepared to praise a new act publicly in this way, hype becomes almost an irrelevance.
Yet the groundswell of hype and the sense of public expectation surrounding Spanish dark electro duo TERROLOKAUST’s incredible second album “God Loves The Violence” continues to increase almost daily – and this is an album that indeed lives up to that hype on every level.
TERROLOKAUST are going to release their 3rd album to coincide with this tour in early 2014.